this is a statement summarizing the state of discussions between devs and community members from teia with devs/managers from objktcom in regards to which swaps (lists) will show up on which marketplace.

if you want to read more about the new teia swapping contract, you can do so on the Blogpost about our new teia smartcontracts.

the new, freshly audited marketplace contract will be implemented soon and with it the question arises which marketplaces other than teia will support the swapping contract.

Teia will keep on using hicetnuncs OBJKT minting contract for the time being. that means the OBJKTs minted on teia will show up on all marketplaces that show hicetnunc OBJKTs (i.e. hicetnunc.xyz, objktcom, rarible, hic.af, etc) this wont change no matter which platform supports which swapping contract. This discussion is only about which “listings/swapps” will appear on which site.

this of course means that swapping on hicetnunc is incentivised as the swaps show up on both marketplaces. Now that there is a 3rd swapping contract in the mix (teia swapping contract) the question of who is showing who’s swaps on their marketplace naturally arises.

the current consensus seems to be that teia wants to support both the teia and the hicetnunc v2 swapping contract for now so that the users don’t have to reswap everything to be listed on teia but new swaps on teia will be created onto the new teia smartcontract. but the question of whether supporting objktcoms marketplace contract has not been fully discussed yet.

how do we proceed?

Over the last few weeks, some developers and community members from teia have had direct private contact with marchingsquare and nftprotector from objktcom to sync ideas and knowledge.

objktcom is a private company and they will act and decide as they wish, they are however open to discussing options and have been communicating with our project.

an option raised pretty early on our discord was to agree on showing each others swaps. this idea was brought to objktcom and they agreed that this would be a viable option. the main question is: what does the community think about this option? (s. i.e. Discord)

it is not clear whether objktcom would show, next to objktcom swaps, both teia and v2 swaps or teia swaps only.

objktcom supporting only teia swaps and not listing v2 swaps would incentivise the use of the teia swap as it would be the swapping contract that would show up on teia and objktcom. this would on the other hand mean that currently swapped tokens (on v2) would need to be reswapped onto either teia or objktcom in order to appear on objktcom.

What is the community’s opinion on that?

share your concerns, wishes, opinions in this discourse thread please:

the two main questions are:

ADD:
of course the same discussion can come up with any other swapping contract. for OBJKTs there is however mainly teias, v2, and objktcoms swapping contracts in the mix. maybe defining a standard like “we show all swaps of OBJKTs” or “we show swaps of marketplaces that show our swaps” would be a worthwhile discussion to have

ADD2:
This discussion is not about us showing NFTs minted through objktcom! It is only about showing swaps of hicetnunc OBJKTs done on objktcom on our marketplace

ADD3: "supporting "swapps in this case only means listing prices (not auctions or offers for now due to mostly technical reasons)

ADD4:
here is a UI mockup by @denscimonk of how “showing multiple swaps” could look like in practice.
(main button = cheapest price ?) 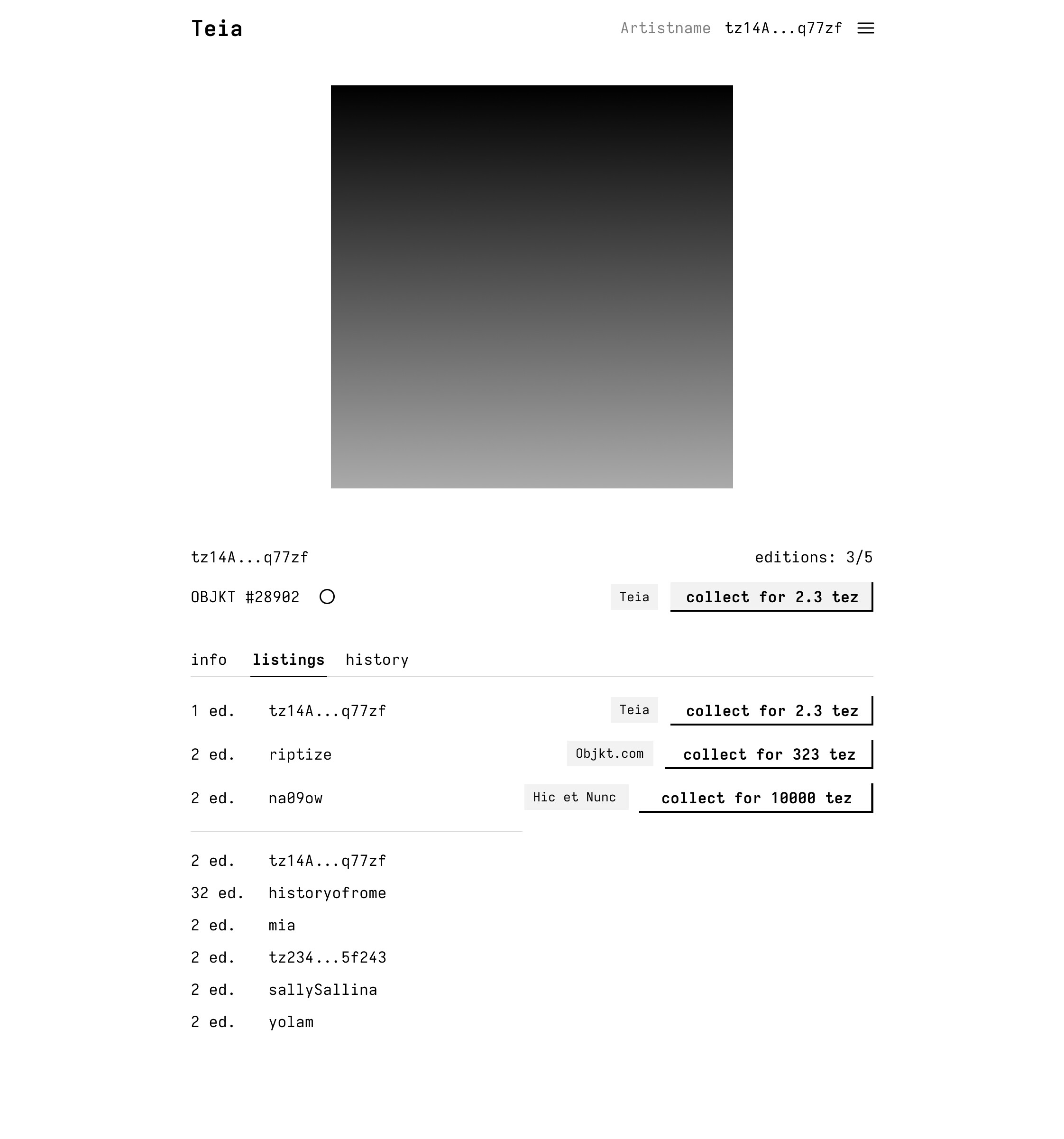 To whatever extent my opinion matters, it feels that it should be an all or nothing situation. There are technical considerations of course. By nothing I mean, show only teia art. By all I mean set up the infrastructure to support all tokens from all platforms.

Which this approach we will increase Teia visibility on Objkt.com. It’s useful for artists and collectors.
And it’s also fair when we show the swaps of someone, if someone is showing our swaps.

given we only show OBJKTs (minted through the original hicetnunc minter)
you wouldnt even list v2 swaps? no other swaps?

We have one token for now, which is OBJKT, but we can have wider infrastructure of the swaps. So other projects can join this infrastructure too.
I think for now we are not planning to be an aggregator of other Tezos tokens.

Here is the screenshot of this possible update to visualise the idea better.
You can find the swaps there from the other places, such as v2 and Objkt.com.
We can display labels there, so people will see the source of the swap.
Main button - the cheapest swap, as usually.

Ok, for me it was helpful to learn that were discussing the support of the OBJKT token swapped on different contracts. To that end, I’d support showing OBJKTS swapped on from any contract.

Glad to see this. Favor showing objktcom on teia. Favor v2 on both o&t platforms. Makes it easier to follow history of artists, rather than quarantining crzy.

This sounds beautiful indeed, but what about our community financials?

How will our model become part of those closed economies?
Are we able to monetize outsorced NFTs?

How will we be able to sustain a long term project and ensure the quality of the community we built, if a massive number of creators still minting there will be outnumbering us in our own platform?

Note I don’t like building walls, but in fact we are surrounded by them.

Now, from the point of view of an artist, having my NFT indexed in the most platforms possible is indeed great. What I would support in this case is a bridge, a tool to migrate your NFTs from other contracts in the moment you want, giving a new life to your tokens. A new chance for it to shine, on a more randomized model other than time based such as fxhash.

I bet literally everyone here have that unsold forgotten NFT, ready to be burnt into crypto ashes. They all deserve a second chance.
There are thousands of ways we can make this work, I’m not against it.
But it must be way more well planned for embrace actual implementation.

At the same time I think a lot of good can come out of it, we cannot be blind about the problems we may face in such a starting point - a new hope.

i would have one major concern with that approach:
if we only list teia swaps, it would be very very hard to get people (the general user) to swap on teia.

i am afraid if we insulate ourself, we wont get people to swap on our contract which will be super important for us esp. in the beginning of the project.

the DAO will take time to form, depending on how active people work on setting it up, the org structure (core teams/guilds) are lanned to be set up over time. in the meantime we can vote via the voting tool so we dont get stuck while waiting for the full dao to be formed.

I guess my strategy would be to start from scratch, I’m not going to reswap anything, I’m happy with my V2 stuff to stay on H=N where they belong, and I feel OBJKT.com is set to become the main hub for Tezos NFTs, so they’ll probably list us in a collection, or whatever, I don’t really care. Ultimately I’m not even sure if we really need to run a platform before the DAO is set up…And I realize it’s a very very very idealistic point of view. I guess I feel it will be easier to build from the bottom up, rather than tweak things along the way. (my 2 cents also

what would you do if objktcom decides to not list v2 anymore?

my opinion is to move forward
focus on Teia’s features and provide them as a framework too
marketplaces are already flourishing, the next organic move is to become a set of tools to enable not only artists but NFT projects around the world
once it gains enough traction HENv2 contracts can also be de-listed if HEN.xyz is online
if HEN.xyz ever comes down again maybe consider a legacy HENv2 Teia page

I mostly use objktcom to make sneaky offers on secondary market, I still swap on the V2 contract. If objktcom stopped listing the V2 contract, I’m confident I’ll still be able to use the many clones, hicaf etc…
And I’ll use H=N, actually glad it’s back.

I would love to see items that I have collected on Objkt[.]com contracts displayed within my Teia collection - this is something I had been wondering about prior to Teia’s evolution.

My belief is that for our corner of web3 to be sustainable, interoperability between platforms is absolutely essential.

I feel that walled gardens, as a concept, foster competition rather than collaboration. I would personally like to see platforms continue to encourage collaborative interoperability, as that is where I think the key to a healthy, growing community lays.

As far as swaps go, I am planning to re-swap everything that I have on the v2 contract, to the new Teia contract, when it goes live.

so we always have to make it clear that

on teia we are only able to show tokens minted on the hen OBJKT contract (v1) - that includes OBJKTs minted on hicetnunc,.xyz hicetnunc.art, all the mirrors and teia. those will show up on all the sites that support OBJKTS (like teia, hicetnunc, objktcom, hic.af, henext, rarible, and soon versum too) - so: you will see all those tokens on teia too

the question raised in this discussion is only about listing prices.
if you swap a hen NFT on objktcom it gets swapped onto objktcoms own smartcontract (they collect fees from that) - teia will soon have their own smartcontract too (currently its the same as hicetnunc.xyz - crzypatchwork collects the fees)

Yes, I would support the display, and ability to collect, using swaps from Objkt and the v2 HEN contract, on Teia, as displayed in the UI mockup. It does make things more convenient for collectors and artists alike, in my opinion.

Thanks for the great explanation, Merchant!
I think the more swaps we can show on Teia the best. It makes it more inclusive and an easy go-to place. I like how it looks on the mockup.
Is there also a plan of showing NFTs minted on other marketplaces? FXhash, Rarible, OBJKT…?

I’m in favor of showing objkt com OBJKT swaps in Teia and collaborating with objkt com for them to show Teia OBJKT swaps on objkt com. In general I tend to agree with the idea of “show all swaps of OBJKTs” whenever possible, I think it is good for artists/collectors.

Regarding the interface, I like denscimonk’s mockup. I think the most user-friendly is for the main button to show the cheapest price regardless of platform.